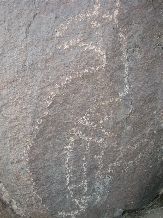 One of the most intriguing wide-spread images found in the Southwest is the humpbacked flute player. He is easily recognized by his flute, humped back and prominent phallus. An aura of mystery surrounds Kokopelli: Was he a fertility symbol, roving trader, rain priest, magician, trickster or a seducer of maidens? We know he is quite significantly one of the few prehistoric deities to have survived in recognizable form from the Anasazi times until today. His image appears in prehistoric rock art, ceramics and murals. Most Kokopelli rock art is found within the Anasazi territory in the Four Corners area on the Colorado Plateau.

Kokopelli’s origin may be lost in time but his legends live on. Some people believe he may have come from ancient Mexico or South America as a trader carrying his goods on his back. In Pueblo stories, Kokopelli carries in his hump seeds, babies and blankets to offer to the maidens he seduces. In the upper Rio Grande pueblos, he is said to have wandered between villages carrying his bag of songs on his back. Some believe he was a fertility symbol welcomed during the corn planting season and by barren wives.

From the thousands of rock art images of Kokopelli we know without a doubt he was very important in the lives of the prehistoric people of the Southwest. Today, Kokopelli can be found depicted in rugs, baskets, paintings, Native American jewelry and decor.

A man traveled through this country with a bag of corn seed over one shoulder. His shadow against the desert looked like a deformity. He would stop at every village and teach the people how to plant corn. And then when the sun slipped behind the mesa and the village was asleep, he would walk through the corn fields playing his flute. The seeds would flower, pushing themselves up through the red, sandy soil and follow the high-pitched notes upward. The sun would rise and the man would be gone, with corn stalks the height of a young girl shimmering in the morning light. Many of the young women would complain of a fullness in their bellies. The elders would smile, knowing they were pregnant. They would look to the southwest and call him “Kokopelli.”