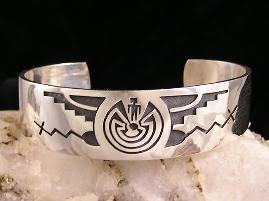 The “man in the maze” was originally created as an illustration of the emergence story by the Tohono O’odham or Papago Indians of the Central Valley in Arizona. The “man in the maze” is a visual representation of the Tohono O’odham Indians belief in life, death, and the life after death. From family to family, interpretations vary slightly. The human figure at the top of the maze with seven concentric circles with the seed pattern in the center represents birth and the center death. The maze is our journey through life and the roads we choose, the many turns and changes. Through all of our struggles and lessons, we grow wiser and stronger as we progress towards the center of the maze. The center represents death and becoming one with Elder Brother, I’itoi, the Creator. As one approaches death, one is able to look back on the completed journey with its many twists and turns, and finally be pure and in harmony with the world, death and eternal life are accepted. The right choices lead us to a point of harmony. The Gila River Indians, the Akimel O’odham, believe at this point that death is the beginning of a new journey and, thus, the cycle repeats itself.

The “man in the maze” symbol is often depicted in Native American pottery and baskets as well as Navajo and Hopi overlay jewelry. 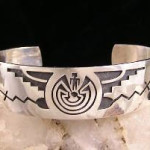 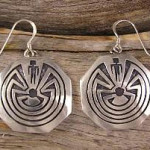 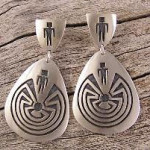